I love getting a glimpse into other cultures.  We always enjoy searching out areas where the locals hang out, and you aren’t quite as likely to run into crowds of international travellers.  We’ve experienced Chiapas, Mexico before, but this time bringing along cousins Vivian and Wilson allows us to share with them the magic and beauty of some of these amazing Pueblas. Chamula is high in the mountains, over an already high city of San Cristobal de las Casas.  We returned the following day, when it was misty and cloudy, but I didn’t take any photos without a guide to let me know when it was advisable.  On that day it was literally like being in a cloud.  Just simple mist in the air, clinging to everything, but no real rainfall.

Go to the cross in front of the church, town centre in San Cristobal de las Casas.  Look for someone representing AlexyRaul tours.  Be there just before 9:30, and you can hook up for a tour to San Juan Chamula, and San Lorenzo Zinacantan.  The tour is about 3-4 hours (250 pesos – $17) and is one of the best we’ve ever been on.

Both Chamula and Zinacantan are indigenous villages (populated by the Tzotzil – Mayan tribe) a short distance from San Cristobal.  These villages are unique in that they are autonomous from the rules, laws and taxes of Mexico.  They govern themselves entirely.  One of the things we noticed about that is the cars don’t have any licence plates, and virtually as soon as you can reach a gas pedal you can drive…… Needless to say, this can only happen in your village.  Chamula is fiercely independent, and they do not take kindly to outsiders.  A man may marry or bring in an outsider (polygamy is acceptable) but not a female.  No outside males may ever reside in Chamula.  Be very careful taking photographs here, and certainly don’t take ANY of the religious leaders or ceremonies.  Our tour guide explained that we were able to take photos of general scenes, and if that happened to capture some individuals, that is the best you can expect.

Arriving in Chamula, our first stop was the cemetery.  Not the solemn place we come to expect in Canada.  Large family groups gather on a regular basis to visit, laugh, talk, eat and drink with their departed family members.  A band is even hired! All those dry pine needles are from previous visits.  They will routinely be replaced by fresh needles. 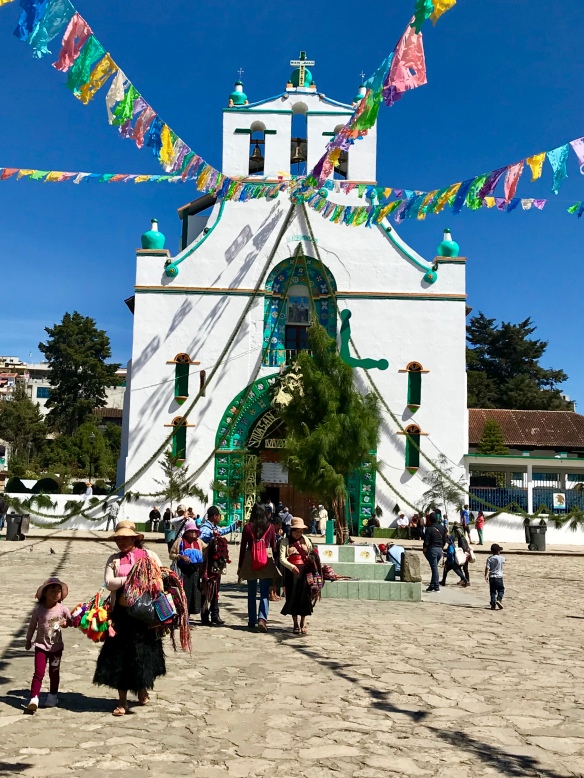 The church, and square is central to all activities.  Built as a Catholic Church, it quickly became more Mayan.  The decorations are all part of Mayan life, and inside it is an interesting combination of Catholic saints and Mayan worship.  You won’t find any pews, or altars, but rather a floor lined with pine needles, candles burning, live chickens and flower petals.  Don’t forget the Coca Cola.  This pop has a life of its own here – considered quite sacred, used in religious ceremonies and just consumed by the case.  We even noted a sign for a village named San Juan Coca Cola.  There are family groups scattered around, each with their own healer, performing ceremonies, and praying to the saint of their choice.  NO, I certainly didn’t take any photos inside.

Sunday is a big market day, with both Chamula residents, and those from outlying villages offering everything you can think of. 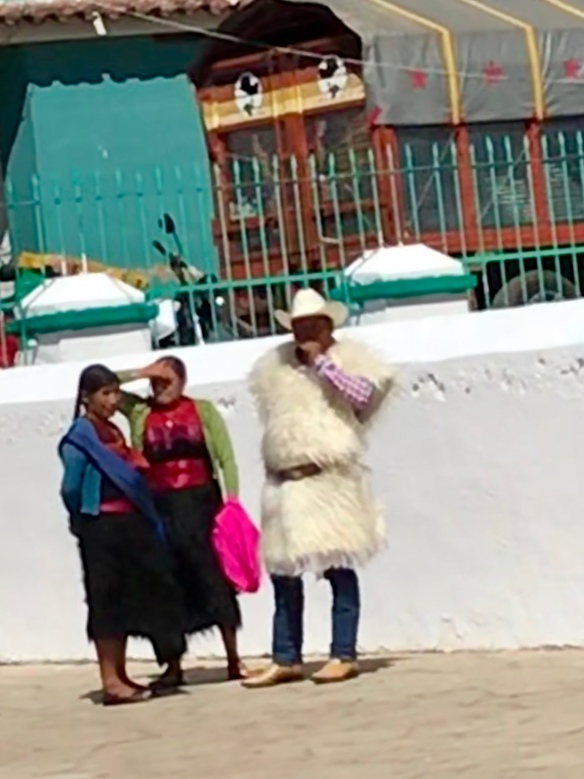 The residents of Chamula speak Tzotzil, and wear traditional clothing all the time, not just on festival days.  The black skirts are woven from the wool of the black sheep you see grazing on the hillsides all over the place, while the men wear the white tunic primarily in the warmer weather, but a woven black coat in the winter.  Black sheep are so predominant here that if a family member causes trouble, they are considered the “white sheep”.  Not the best photo, but I had to crop from a large “scene” photo. 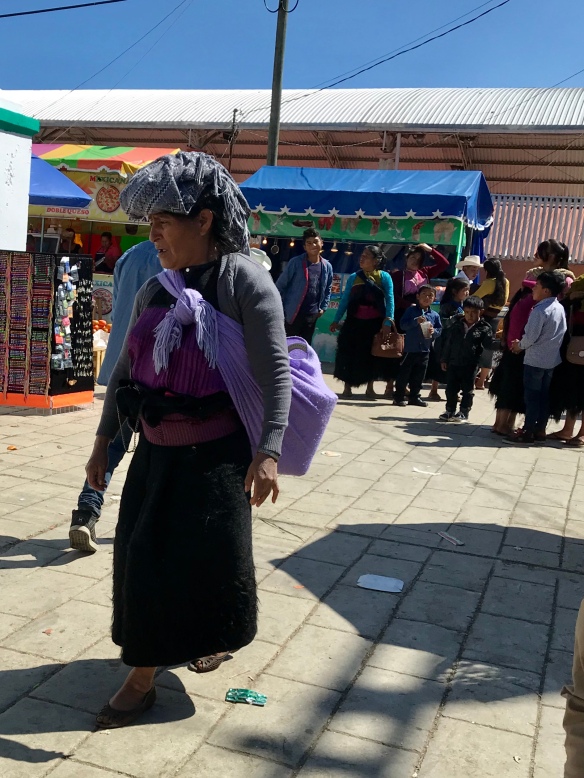 The women often have a scarf or shawl on their head, perhaps to keep the sun off?

We had taken the tour with Alex and Raul  tours about 7 years ago, and returned the following year so Mike and Hayley could experience that.  We have visited the villages since, but with Vivi and Wilson along, we wanted to have them get the same information.  It is really refreshing to find a tour guide that has such respect for the areas we are allowed into.  He also took us into a “holy” home, where some religious ceremonies were performed.  Needless to say, no photos were allowed, but how I wish I could have recorded that room with the incense and smoke absolutely filling the space, such that it was difficult to see across.  The floors are covered with pine needles, and the saint is protected from view by multiple levels of foliage.  The elders and religious leaders were praying and the musicians kept up a steady beat.  It is literally impossible not to be moved in such a setting.  Alcohol plays a large part of the ceremonies too, with them consuming “poxx” or “posh”.  Over 40% alcohol, it is distilled from sugar cane and helps, with the repetitive music, take them to a “higher level of consciousness”.

These women are selling fleece recently sheared, for the woven garments. 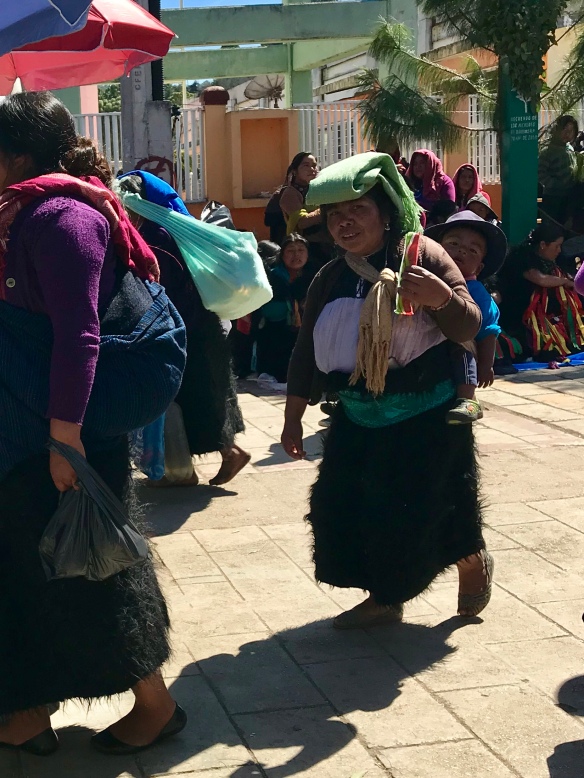 The women of Chamula gather to socialize on market day.

Can you even imagine how warm these woven wool coats are?  Note the 4th man, with the “rifle” over his shoulder??  That indicates he is a policeman.  They carry sticks, to represent rifles, and travel in pairs throughout the village.  That wheelbarrow is full of bags of freshly cut coconut and mango, just waiting to be drizzled with hot sauce.  Delicious!

When you return from a visit to these villages, it is with a sense of experiencing the surreal.  A guide allows you the comfort to see the areas you wouldn’t otherwise be able to.  We don’t often hire them, but when we do, it is to make sure we are understanding the cultures and customs of a region without offending.  These indigenous villages are that situation, and when I get home, I often drift back to these moments, with a sense of privilege that we were able to experience this.  I want so many more photos than I take, just to memorize the images of such beautiful faces, unadorned with makeup and certain on their path, unchanged for generations.  We did notice certain differences this time, in that more people had cell phones and I can’t help but wonder how that will change their future.