We left our B&B at Santa Elena after breakfast, ready for a day of adventure in our rented car.  Good thing we were ready because it was one full day.  It seems that everywhere you look in this region you will spot ancient pyramid structures.  The town of Izamal  has 3 of them in the midst of town – it could be right beside a house!

Our first stop was at Labna,  I love the ruins that are so quiet, it allows you to feel the peace, the energy, and to just listen to the birds.  This is one site believed to be very important as it housed around 3,000 Mayans in the 9th centre.  Don’t miss this on the Ruta Puuc as the architecture is truly Puuc style and very interesting.   They were well known for their cisterns, at their peak they had 60 around the city.  As many ruins as we’ve seen I’m always impressed with what they were able to do in ancient times with so few tools.  There is something about wandering around these structures without crowds of people that allows you to feel the vitality of civilizations past. 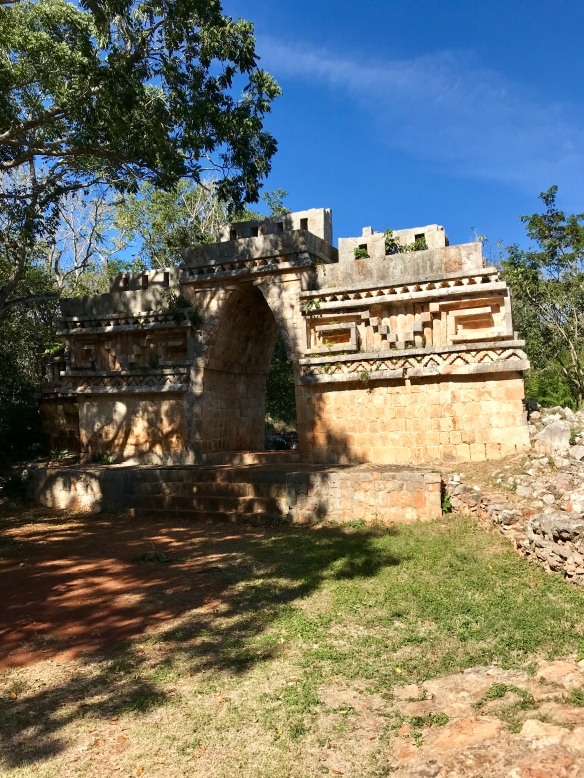 These beautiful structures were spread over quite a large area, and they haven’t even restored it all.  In 2006 they completed the restoration work we were able to see.

No, we aren’t allowed to climb on the structures, but I think sitting for a photo is okay ……

So many years later, the structural integrity of this building was still intact.  The only restoration needed was in the arch and stairways.  Obviously a brilliant civilization to be able to accomplish all this.

It was hard to tear ourselves away from this beautiful setting. BUT, caves are waiting!

Loltun Caves “Grutas de Loltun” were just down the road, and an amazing experience.  That road though!  After driving miles in the Yucatan it is so refreshing to drive down a road with something to look at – lined with lush orchards, banana and palm groves.

Yes, we are going down in there.  Some of us under duress.  (no, I’m not looking at you Vivi) 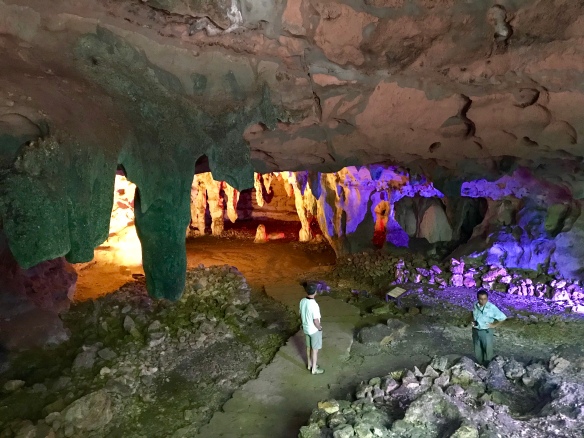 It is necessary to take a guided tour through the caves.  Our guide, Ricardo, was full of information, including the fact  that we would only be seeing 2 k of the 10 k trails.  They are very protective of these caves, and understandably so as they are the most important cave system in the Yucatan Peninsula. 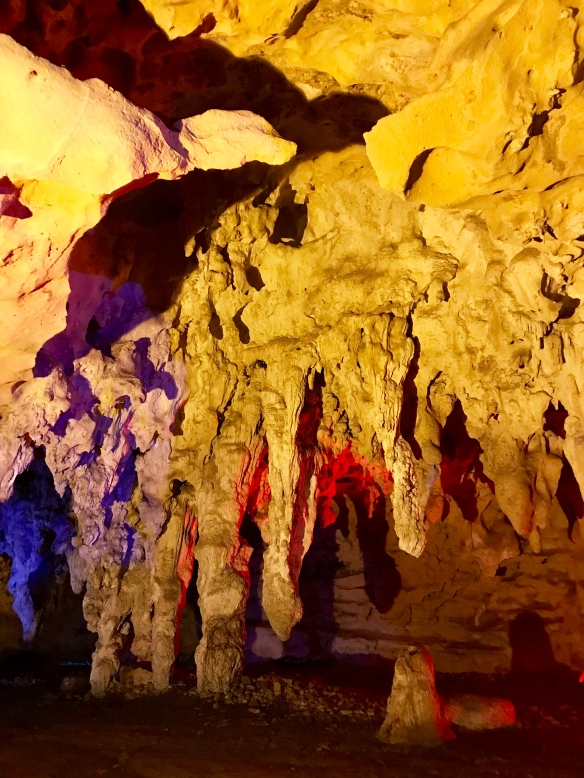 Can you see why we didn’t want to tell Vivi why we were so far underground?  These stalactites were enormous!  No stalagmites form here as the minerals get washed away during the flooding in rainy season. 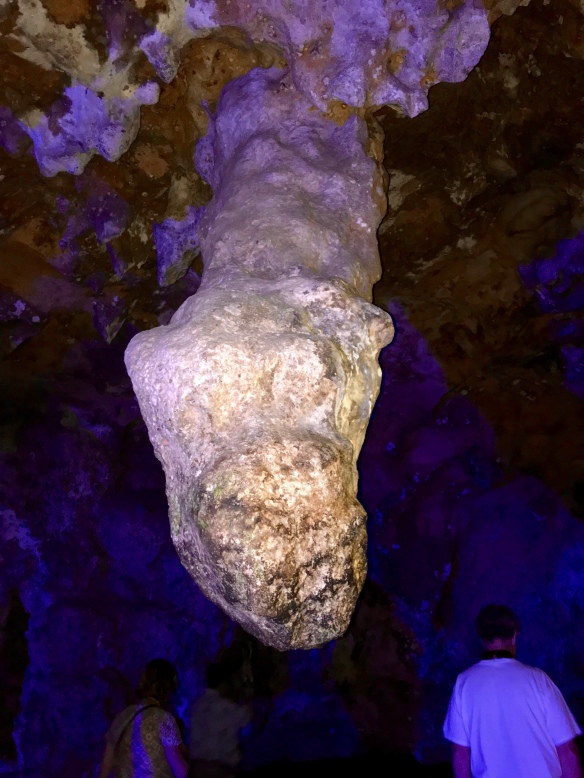 This particular stalactite is hollow!  The cave structure received it’s name from this. When you hit it in one area it makes a “lolllll” sound, and a second area makes the “tunnnnn” …. lollllltunnn.  We were able to replicate this ourselves, and felt the reverberation right through us. 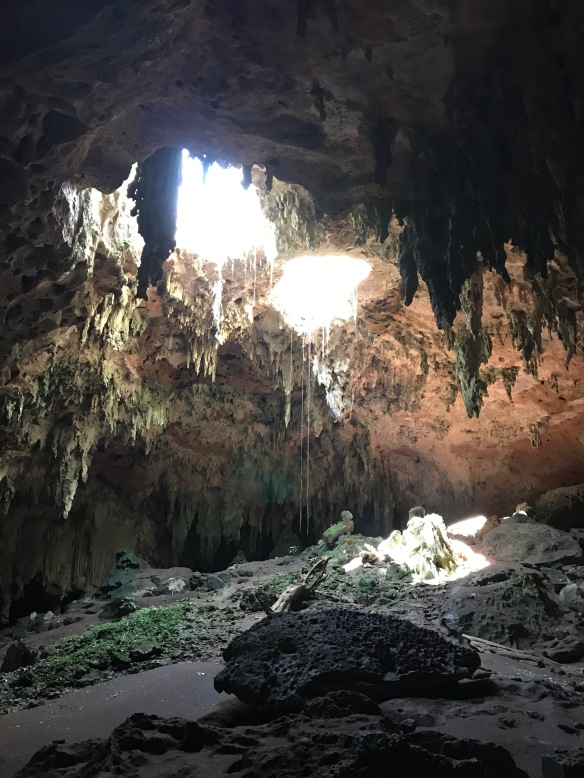 The light is coming from a hole above.  Mayans didn’t live in this cave structure, but rather used it for worship, or protection from either animals or enemies.  They would also use it to drive animals to it, who would then fall to their death in order to be eaten.  Standing here, surrounded by energies from civilizations past, it was one of those moments both Vivi and I thought would be imprinted on us.

These hand prints on the walls are just some of the evidence found here – a treasure trove for archeological studies.  Evidence has been found that has been carbon dated to over 2,200 years ago.  That boggles my mind.

Same day, can you even believe it is the same day?  We are off to cenotes.  You know Grant, when we’ve got a rented car it is not going to sit around …..

Just outside of Izamal is a series of cenotes called Santa Barbara.  In the Yucatan peninsula there are over 6,000 cenotes – natural sinkholes.  They are formed when the limestone bedrock, forming the roof of an underground cavern collapses, exposes the ground water underneath.  Not when a meteorite struck as some believe …..

This one in particular is fun to go to, as you can choose to walk between the cenotes, ride a bike, or get pulled by horse on a rail track.  You know with Vivi we are always going to go the horse route, as with Hayley, Sloan and Stella when we were here last.

Seated on a cart, these little horses pull us along at a pretty good clip to a series of 3 cenotes.

The water is crystal clear and so refreshing.

Some cenotes have quite a large opening above to let in light, but others just have an opening large enough to have a ladder going down, and enough room to climb it!

This cenote is largely an open area, just look at the roots on the trees above us stretching for water.  In rainy season they are underwater.

At long last we are ready to find a place to stay in Izamal.  Only 70 k from Merida this entire historical district is painted with a bright, vivid yellow giving the city a nickname of “the yellow city”.  This is a beautifully quiet little place, lovely to walk around.  Right next to a home you might see the remains of a pyramid.  The town centre has 3 pyramids around it that are easily accessible.

We found an amazing little B&B to stay at.  Juan and his staff were amazingly friendly and attentive.  Not only was the place a beautiful spot to relax, it was quirky enough to have us wandering around looking at it all! 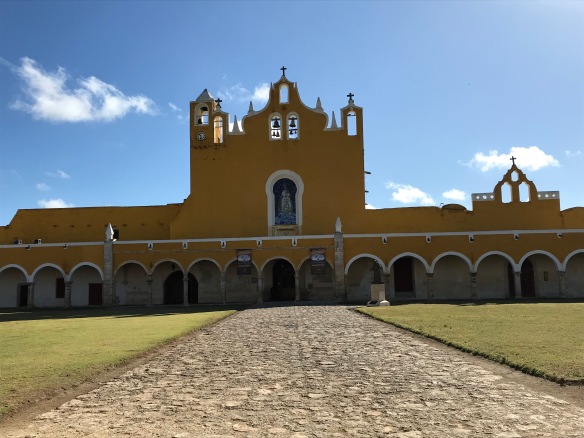 This Franciscan monastery is at the centre of town.  There are so many images of Mayan gods in the town, on the ruins, that it provoked the Spaniards to build this large structure overlooking Izamal. 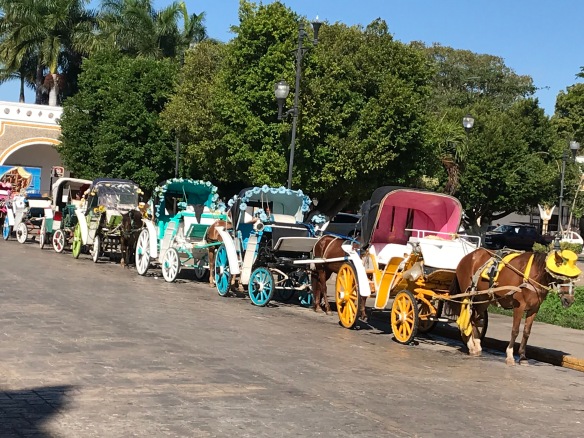 These beautiful little carts and dressed up horses are available to use as a taxi, or to just have a tour of the area.

We loved this beautiful little spot!  Viv and Wilson had the blue bungalow, and we had the pink. 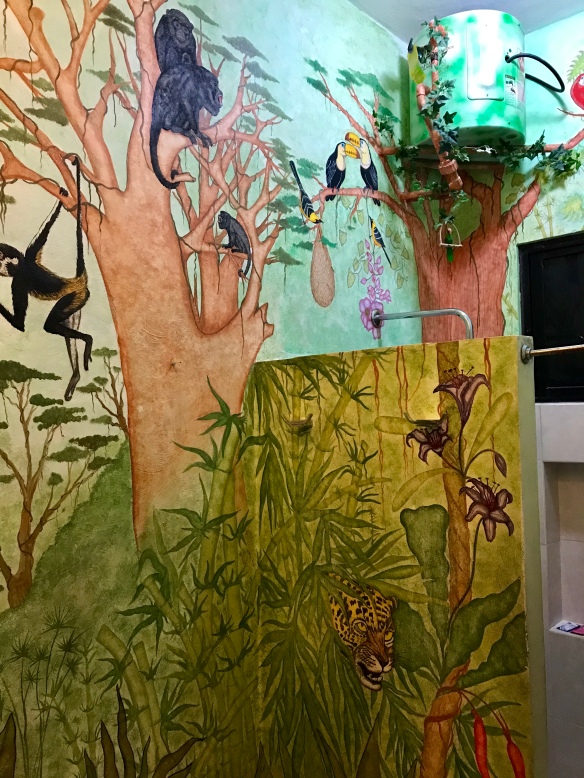 The owner, Juan, was very friendly.  This is the jungle room, and the entire room is painted like this!  Incredible to view, but I’m not sure how restful ….. I might have been apprehensive about getting attacked!

And ….. that’s a wrap on a simply magical day.  We finished at Kinich Restaurant, traditional Yucatecan food.  This dish of chicken on a white bean puree, with tomato and nut sauce was lip smacking good.  That glass of green hovering on the edge of the photo is a Chaya drink, an herb somewhat like spinach.  Delicious and refreshing.

Time to return the rental car to Merida, so we headed to Progresso first for lunch, and a search for some flamingo winter resting grounds.  We did find them but not close enough to be photo worthy.  In spite of that, we loved seeing them in the mangrove – so beautiful and graceful.  This was the moment I wished for a real camera instead of my phone! Maybe someday.

The 7 km pier at Progresso is ready to welcome cruise ships …….eek.

I don’t understand why Mike hasn’t insisted I get a selfie stick yet.  Maybe because he knows Grant won’t carry it?

After this we returned the car to Merida, staying for one night at a slightly sketchy hotel with a quirky host …… Grant blocked the doorway with his pack!  Funniest part was trying to find it, we got to the right address but no hotel.  So off we went, walking down the road with our bags.  Eventually I phoned the hotel and got an English accented Canadian who said “oh, are you the people with bags that were at the door”????  Should have been our first clue and kept us walking but it all adds to the adventure.  Or, so I tell myself.  Its time to hit the beach.