You know how it goes when the fruit on your kitchen counter starts talking to you when you walk past ……. “Hey Kathy, whatcha gonna do with me”??  That happened this week with a couple bananas looking spotty and a few Mac apples.  Add in a little fresh orange juice and you’ve got a fruit salad in a loaf. 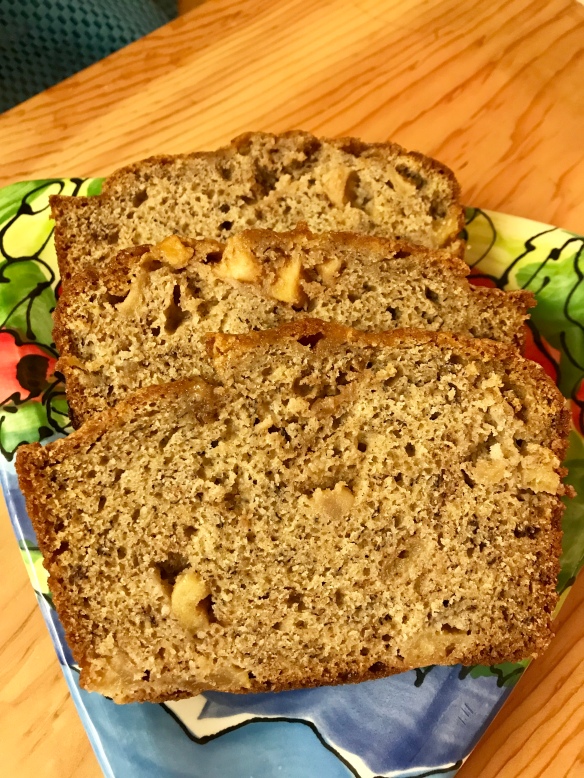 Chunks of carmelized apple and a bit of orange juice make this the most moist loaf ever.

In a large skillet, melt 2 tbsp butter with the brown sugar.  Add the apples and cook over moderately high heat stirring until tender and golden, about 4-6 minutes.  Add 1/2 tsp cinnamon and 1/2 tsp vanilla and transfer apples to a plate to cool off.

Preheat oven to 350 degrees.  Grease and flour a 9 x 5 x 4 1/2 inch loaf pan.  I also like to line it with parchment paper.  In medium bowl, stir together flour, baking soda, salt, cloves, nutmeg and the remaining 1/2 tsp cinnamon.

Scrape the batter into the prepared pan and smooth the surface.  Sprinkle raw sugar over the top.  Bake for 1 hour and 20 minutes or until a toothpick inserted in the centre comes out clean.  (cover loosely with foil if the loaf starts to brown too quickly). 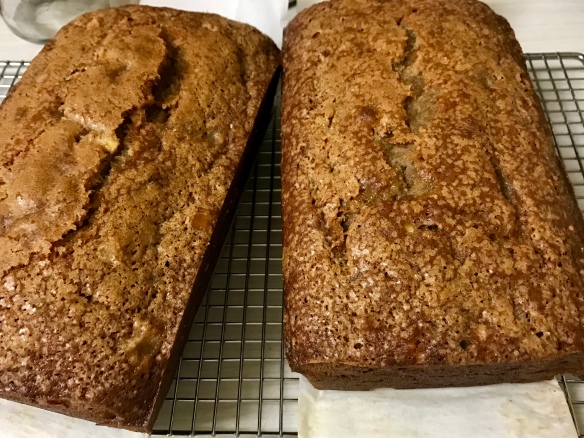 Let the loaf cool in the pan for 10 minutes before turning it out onto a rack to cool completely.

Combine an apple pie with shortbread bars and you have this winner!  I found this recipe in my latest Food Network magazine, from Ina Garden, and I’ve already made it twice.  The first time without the nuts so that the kids can take it in school lunches.

Make sure your little helper has fun!  Stella loves working in the kitchen with Nana…

Preheat the oven to 375 degrees.

For the crust, place the butter, granulated sugar, brown sugar, and vanilla in the bowl of an electric mixer fitted with the paddle attachment and beat on medium speed for 2 minutes, until light and creamy. Sift the flour and salt together and, with the mixer on low, slowly add to the butter-sugar mixture, beating until combined. Scatter two-thirds of the dough in clumps in a 9 × 13-inch baking pan and press it lightly with floured hands on the bottom and ½ inch up the sides. Refrigerate for 20 minutes. Bake for 18 to 20 minutes, until the crust is golden brown, and set aside to cool.

Meanwhile, put the mixing bowl with the remaining dough back on the mixer, add the walnuts and cinnamon, and mix on low speed to combine. Set aside.

Reduce the oven to 350 degrees.

For the filling, combine the Granny Smith and Golden Delicious apples and lemon juice in a very large bowl. Add the granulated sugar, cinnamon, and nutmeg and mix well. Melt the butter in a large (10-inch-diameter) pot, add the apples, and simmer over medium to medium-low heat, stirring often, for 12 to 15 minutes, until the apples are tender and the liquid has mostly evaporated. Spread the apples evenly over the crust, leaving a ½-inch border.

Pinch medium pieces of the remaining dough with your fingers and drop them evenly on top of the apples (they will not be covered).

Make sure you taste …….. Stella already knows this, here she decided to add a few oats and more cinnamon to the topping mix ….. it was a hit!

Bake for 25 to 30 minutes, until the topping is browned. Cool completely and cut into bars.